Making the most of Malta: a first timer's guide

Much-loved Malta* continues to be a big hit with holidaymakers but if you haven't been before, where do you start? This at-a-glance guide to Malta aims to give the first time visitor some tips and hints for making the most of their holiday.

The island nation is actually an archipelago of seven separate islands, of which just three are inhabited, with Malta, the largest landmass, being the main holiday hub, followed by the second largest inhabited island, Gozo.

Best known as a hot and sunny destination with around 300 days of sunshine a year and more than one hundred different dive sites, there's a whole load of history to discover, too.

Due to its pivotal location in the centre of Europe, just 50 miles south of Sicily, the islands have been ruled by everyone from the Phoenicians and Romans to Byzantines and Arabs, not to mention Napolean, meaning architecture and history buffs will be blown away.

Getting to Malta: check out the latest deals on escapes to Malta with Mercury Holidays*.

Where to go in Malta

The capital and most well known of Malta's main cities is Valletta*. This petite centre is, in fact, the smallest capital city in Europe as well as a UNESCO World Heritage site with an impressive 16th-century harbour and fortified walls overlooking the Mediterranean Sea.

Most visitors head for a history fix at one of the city's stunning churches: St John's Co-Cathedral is considered to be one of Europe's most stunning examples of baroque architecture, built by the Knights of St John in the late 1500s. You can also take a trip back in time with a visit to Casa Rocca Piccola, a 16th-century palace.

Valletta is the centre for museums in Malta including the National War Museum, which concentrates on Malta's part in WWII and, when you're ready for history of a different kind, settle into a seat at the city's oldest coffee shop, Caffe Cordina.

Any guide to Malta simply has to mention the famous 'Three Cities' but what are they and why are they so special?

In the 16th century, Malta's position between Europe and North Africa ensured the main harbour was highly sought after, so the coastal cities of Vittoriosa, Senglea and Cospicua were heavily fortified during this time as a mechanism of defence.

This allowed people to continue to live and trade while protecting them from attack, conserving these beautiful and atmospheric cities, which remain a delight for visitors to explore on foot today.

Malta's most well known tourist resort, situated north of its sister resort of Sliema* and 20 minutes away from Valletta, St Julians* was once a simple fishing village. Today, however, it's home to many of Malta's holiday resorts as well as the country's key concentration of shops, restaurants, bars and clubs.

The Paceville part of town plays host to the majority of the nightlife and is especially popular with the younger crowd. For a more romantic and leisurely evening of people watching, head to the pretty harbour at Spinola Bay.

It's easy to take a day trip to Valletta, a boat trip to the Blue Lagoon or flop at nearby St George's Bay, home to one of Malta's rather rare sandy beaches.

Malta's eclectic mix of peoples and cultures is, unsurprisingly, reflected in the variety of different dishes on offer. The Italian influence is especially obvious with the prevalence of pasta and pizza - even the Maltese word for thank you is grazzi.

For a true taste of Malta, however, you'll want to seek out more traditional dishes: rabbit is extremely popular and appears on most menus or try gbejniet, a Maltese goat's cheese.

For fast food Maltese style, grab Malta's signature cheap snack, the pastizzi, a local take on the pasty made with filo pastry and often filled with peas or ricotta cheese.

From Hollywood movies like Midnight Express and World War Z to TV mega-hit Game of Thrones, Malta's stunning scenery has featured on both big and small screens.

You can tour Malta's Game of Thrones' locations on a day trip, where you'll visit Valletta, Mdina and Vittoriosa (also known as Birgu), and see places used in key scenes at King's Landing and Red Keep.

The islands are well served by Malta's public bus network with around 80 routes running day and night, along with another 15 on Gozo including express and night buses.

Working out the routes is relatively easy as an X denotes an express bus and an N stands for night bus. You can also use the online Malta public transport journey planner to plan ahead.

City Sightseeing and Malta Sightseeing are the two hop-on/hop-off open deck sightseeing bus services on the islands of both Malta and Gozo.

Combining transportation and a tour in one, both companies offer several routes and the perfect way to get around if you want a pleasant and relaxing way to see all the sights.

The taxi situation in Malta is pretty black and white: licensed Maltese cabs which are allowed to pick up passengers on the street are painted white and have fixed fares from the airport, but otherwise operate on a meter, though they can be pricey.

Fleets of taxis owned and operated by private garages are black, and need to be called and booked in advance but are more competitively priced, so it's worth shopping around to find a firm you like. Try ecabs, which offer a reliable service, and free wifi in its fleet of cars.

The fastest and most pleasant way to travel from Valletta across the Grand Harbour or the Marsamxett Harbours is by water taxi or ferry. Check out Captain Morgan Cruises for its regular short crossings.

If you want to travel by water taxi you'll need to order it in advance. These small boats, which used to be rowed by hand giving them a Venetian appeal, may have motors these days but are still a scenic way to travel.

If you're keen to explore the island of Malta in full and at your own pace, hiring a car is a great way of getting more out of your trip, plus navigating the Maltese roads is nice and straightforward. As an ex-British colony, road signs are all in English, too.

As you can see, the weather in Malta is typically hot and very sunny during the summer months and mild with plenty of seasonal sunshine in winter. We've shown the weather in Valletta here but you will find more destinations across the islands on our Malta weather page, plus when we think is the very best time to go.

Planning an island escape to Malta? Don't miss the latest deals from Mercury Holidays, which departs from numerous UK airports. 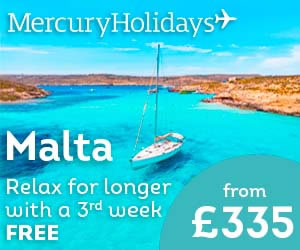 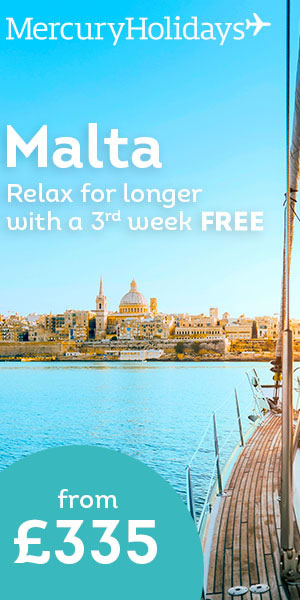