7 ways to be seduced by Sri Lanka

Sri Lanka's popularity has rocketed in recent years and, despite unfortunate natural and man-made upheavals, it looks set to continue.

Here, we look at seven wonderful ways you'll inevitably be seduced by Sri Lanka* from its tastebud-tingling food and wonderful wildlife to the diverse landscape, its colourful capital city and so much more. Let's go!

Getting to Sri Lanka: if you're after a holiday with a difference, book a stylish escape with Mercury Holidays*, which offers breaks to a variety of destinations around Sri Lanka.

Okay, not just the hoppers (soft pancakes made with rice flour) but the curries (sour fish curry is a favourite), the sambal (chilli sauce), the kottu rotis (pieces of dough stir-fried with spices) and the seafood, whether it's salted fish, squid or super-sized prawns.

But we digress. The point is that the country has one of the world's most exciting food scenes. You'll find the above dishes throughout Sri Lanka, but for absolute diversity, it's got to be Colombo.

Essential stop-offs include Ministry of Crab, the high-end seafood restaurant founded by Sri Lankan cricketer Kumar Sangakkara, and, for the sheer spectacle, the colourful chaos of Peliyagoda Fish Market, which opens at 4 am.

Sri Lanka is the world's fourth-largest tea producer, which might well explain its growing popularity with tea-loving Brits.

In recent years, many of the country's tea planters' bungalows have been turned into boutique hotels. You'll find some of the best tucked in among the rolling hills surrounding Nuwara Eliya, a once popular summer retreat for the Brits who came here to trade rubber, coffee and tea.

Be sure to call by the Grand Hotel for a classic afternoon tea, which comes with Battenburg cakes and impossibly dainty cucumber sandwiches.

Sri Lanka has some of the world's most beautiful national parks and has recently done its bit for wildlife conservation by creating several marine reserves, too. This includes Pigeon Island National Park, one of the country's three marine national parks.

Equally wild is the southeast-lying Yala National Park, home to the Sri Lankan leopard along with sloth bears, mongooses and civets.

Twitchers flock (sorry) to Bundala National Park and the Palatupana Salt Pans to spot migrant shorebirds, while the Sinharaja Forest Reserve has several rare species, including the green-billed coucal, barking deer and three types of squirrel.

Warmed by Indian Ocean currents and lined with over 1,600 km of palm tree-dotted coastline, the water surrounding Sri Lanka is a paradise for divers, who come here to admire the colourful coral and the vast range of marine life, whether it's blue whales or huge shoals of tropical fish.

Hikkaduwa is one of the best spots: divers head here for the turtles and multicoloured coral. Kalpitiya, on the northwest coast, has huge pods of spinner dolphins and some of the warmest water in Sri Lanka.

Meanwhile, the waters off Weligama are known for their beautiful nudibranchs (colourful molluscs), manta rays and whale sharks.

Some of the best wreck-diving spots are close to Colombo. This includes the rusting hulk of the British steamer SS Perseus, which sank in 1917 after hitting a mine.

Divers in Galle, on the island's southern tip, should check out the wreck of the SS Rangoon, a Sunderland-built steamer which sank in 1873.

The majority of Sri Lankans are Buddhists while many others are Hindu. You'll find a temple around every corner here, whether it's the golden Buddhist Temple of the Tooth in Kandy, the 2,000-year-old Dambulla Cave Temple or Trincomalee's Koneswaram Hindu Temple, with its bright reliefs.

But it's not just about the temples: one of the country's most photographed buildings is Colombo's Jami-Ul-Alfar Mosque, with its red and white chequerboard exterior.

Yes, we know Colombo* is a city, not a reason, but visitors to Sri Lanka are increasingly spending more time in its capital, rather than simply using it as an entry point.

Look beyond the honking tuk-tuks and seafront construction and you'll find beautiful architecture, especially in the city's fort area, with its red-and-yellow clock tower.

You'll also see some of the region's most vibrant markets, such as the ones in the Pettah neighbourhood, where you'll find everything from fresh fish and chillies to handicrafts and homeware.

Don't forget to take a walk along the beach; grab some street food from one of the beachfront vendors before heading to one of the rooftop bars. Try Vistas Bar at the Mövenpick with its poolside bar and regular DJ sets.

To put it simply, we love Sri Lankans, and we're pretty sure you will too. For starters, they're incredibly accepting, which perhaps comes from the fact that in Sri Lanka, all religious holidays (Buddhist, Hindu, Muslim and Christian) are public holidays. Christmas, for example, is enjoyed by everyone.

They also love to party. Sri Lanka has more festivals than any other country, and one of the most colourful events is the Sinhalese and Tamil New Year. New Year's Eve takes place on the 13th of April and New Year's Day is celebrated one day later.

The above shows the weather in Colombo. Find out more about conditions, which can vary wildly across this island nation, in our complete guide to the weather in Sri Lanka.

Ready to be seduced by Sri Lanka? Browse the latest savings on escapes with Mercury Holidays and book your break today. 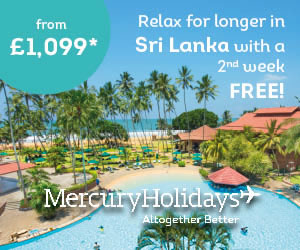 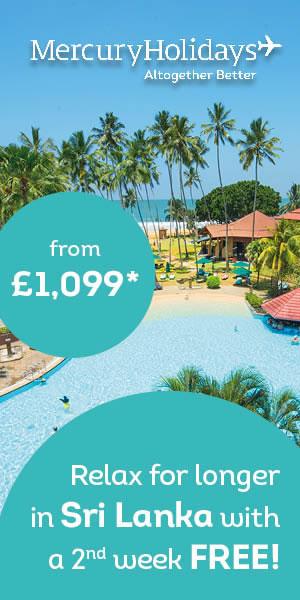