Port guide: the best of the Med with Marella Cruises

The Mediterranean is peppered with pretty ports that welcome all sizes of ships, all year round. If you're considering a cruise in this much-loved region, you won't want to miss our bespoke guide to Marella Cruises' calling points, complete with climate info and top tips for making the most of short visits to these popular ports.

Interested in a voyage with Marella Cruises? Check out the latest deals on cruises* around the Mediterranean - and further afield - in 2022/2023 and get booking today.

Palma* is handily an intriguing microcosm of Spanish cities. There's the pedestrianised La Rambla and a Gaudi crafted cathedral, much like Barcelona, tapas bars that would pass muster in Seville and even a bijou version of Madrid's Plaza Mayor where you can relax with a café con leche and take it all in.

Over the last decade the largest hub in the Balearic Islands has really come of age as a city break destination with a new flurry of funky bars and chic restaurants, not to mention cruise ship passenger-friendly shops.

There are half a dozen food markets, too, in this multi-Michelin-starred foodie hub. It's urban Spain in a day trip nutshell. Book the hop-on-hop-off bus before you disembark to get an idea of the layout or snare a ticket for the cute old train that rambles off into the mountains bound for picturesque Soller.

It's easy to see why the producers of Game of Thrones love Dubrovnik* and why Lord Byron eulogised this southern Croatian charmer as the 'Pearl of the Adriatic'. It really is, a perfectly preserved Baroque city-state tucked beneath rugged limestone mountains and surrounded on three sides by some of the cleanest seas in Europe.

Its pedestrianised old core is awash with chocolate box pretty historical buildings - palaces, churches and monasteries that date back to the city's days as the venerated Republic of Ragusa.

Wandering through the web of old stone-clad lanes is like leafing through the dusty pages of a historical novel. Book a city walk and cable car combo before you arrive to enjoy epic views of this utterly unique city, or get active with a kayak tour around the sturdy old walls; how about a Game of Thrones themed tour?

The Corsican capital of Ajaccio* offers a beguiling mix of cultures, with the rich Corsican heritage woven around the influence of mainland France, much like the character of its most famous son, a certain Napoleon Bonaparte. Born here in 1769, Napoleon, of course, went on to become the emperor of France.

As you breeze into this sun-drenched city you will appreciate its idyllic setting in the Bay of Ajaccio. It's a great city for aimless wandering, stopping off to enjoy superb coffee and something sweet from a very local patisserie.

There's plenty of history too, which oozes from its mélange of older buildings - you can even visit Napoleon's ancestral home and discover more about a man who went on to take over swathes of Europe. You can also reserve myriad day trips if you want to discover more of the island. How about a foodie trip inland or an adventure-themed look at 'Corsica's Natural Beauty'?

You could soak up the vibe in the lively port city of Piraeus* watching the never-ending stream of people scooting off to the isles on the myriad ferries, but most visitors understandably instead make a beeline for Athens. You should too, as the thrilling Greek capital is literally the birthplace of western civilisation as we know it, a truly miraculous place whose importance cannot be overstated.

Stand on the landmark hilltop Acropolis and visit the glitzy new Acropolis Museum to learn more about Greek civilisation. Afterwards, the atmospheric streets of the old world Plaka await and the grandeur of modern Greece strides proudly across Constitution Square, where the soldiers theatrically strut through the changing of the guard ceremony.

Before you sail in you can snare a hop-on-hop-off bus ticket that covers both Piraeus and Athens, choose from a vault of historic tours or venture off to check out the breathtaking Corinth Canal.

It may be best known as a beach holiday island, but handily the capital of Corfu Town* is also a deeply historic city that wears its colourful heritage very much on its sleeve. No wonder it has been enshrined on UNESCO's coveted World Heritage list with its epic sweep of castles, churches, and palaces.

The most striking legacies have been left by the British and the Venetians. When the Venetians sailed in they liked it so much that they decided to stay for centuries and build lavish houses bedecked with those distinctive balconies.

A hop-on-hop-off bus tour takes in the pick of the sights. If you want to push out further those beaches await, as does the rich interior and coastline of the 'Emerald Isle', with gems like the Sea Caves of Paleokastritsa, Greece's answer to Capri and a striking riposte at that.

You'll feel like you have been here before when you first catch sight of Thira* in Santorini, an icon beauty and the quintessential Greek island. It strikes forth with its whitewashed houses, gleaming blue roofs and domes, which are the perfect foil for the deep blue seas that ripple temptingly all around the sea cliffs.

The pretty blue-topped town of Oia is a star, where the centuries peel back at every turn - it invites a wander. You can gaze down into a volcanic caldera here, which helps you appreciate just how much volcanic activity has formed the island that fills your senses with Mediterranean joy today.

Alternatively, how about chilling out in the hot springs at Palea Kameni or taking an excursion that discovers the 'Hidden Santorini'? Whatever you do you will soon why Santorini is so regularly featured in those top islands of the world lists.

The 'Eternal City' is one of those places that you have to visit at least once in a lifetime. The epic streets ooze history and drama with landmark sights already imprinted on your brain before you arrive like the epic Colosseum.

You can stroll through the very heart of Roman life across the Forum feeling the centuries beneath your feet on stones once smoothed by the sandals of Roman legionnaires. Another Rome awaits in the Vatican City, a state within a city that's impossible not to be overwhelmed by, no matter your beliefs.

As the Italian capital, Rome also boasts a lively café culture and some of the best shopping in the land. This being Italy, that is really saying something, so bring your credit cards. Getting to Rome sees you arrive into the port of Civitavecchia, just over an hour's transfer from the inland capital.

You could easily spend the day in the city of Naples* as it's the home of pizza (the first Margherita was conjured up here in 1889 to celebrate the eponymous queen), and it boasts myriad historic treasures of its own in its UNESCO World Heritage-listed old town.

These are, of course, dwarfed by what you will find starring nearby at Pompeii. The citizens of this world-famous village and its cousin Herculaneum were wiped out by the massive volcanic eruption of Mount Vesuvius in 79AD, but they left an intriguing legacy in their eerily preserved houses, streets and public buildings.

Perhaps most striking are the inhabitants who were turned to stone by the volcanic ash. Pompeii is truly one of the world's most unmissable historic sights. A more relaxed excursion awaits on the glitzy offshore island of Capri, which is a favourite of the Italian cognoscenti and Hollywood A-Listers.

Top tip: although you can often find last-minute cruise deals, ships tend to fill up more than a year in advance. If you're thinking of taking a cruise, it's best to book as early as possible to avoid disappointment.

Sicily is Italy's sultry southern charmer and the lively port city of Messina* boasts plenty of character and swagger. It's a great city for strolling around taking in the inspiration for Shakespeare's Much Ado About Nothing.

One unusual attraction is the Norman citadel on Piazza del Duomo, which houses the world's largest astronomical clock - come here to see it in action at midday. Towering over proceedings in this scenic part of the world is Mount Etna, one of the world's most famous volcanoes. You can rattle along its lower slopes on the narrow gauge Circumetnea Railway.

If gangster films are more your thing, you won't want to miss out on a trip that delves into the 'Godfather Villages' of Savoca and Forza D'Agro. You'll get the chance to peek inside the church where Michael Corleone's wedding was filmed as you slip behind the silver screen.

The Maltese capital of Valletta* is one of the great harbour cities of the world, a striking wonderland of sturdy stone bastions, sweeping walls, soaring churches and looming cannons, that dramatically hint at the tumult of history that has swept through this Mediterranean outpost.

The old centre is awash with museums and cultural institutions, where you can learn all about the various civilisations who have tried to hold sway here and the now fiercely independent country of Malta.

You can easily spend a day wrapped in the charms of the city with a walk around its historic walls opening up a real window into its past and present. A boat trip is also a fun way to get a real feel for this most beguiling of cities and these can be booked onboard. Excursions also delve deep into the hinterland and the chocolate-box pretty village of Mdina, the former capital.

It may be a relative newcomer to the cruise ship world, but Kotor* is easily one of the most striking destinations anywhere in the Adriatic. The approach could not be more breathtaking either as you ease into the winding island-studded Bay of Kotor beneath vaulting limestone mountains, with wee churches blinking back from the steep vine-clad slopes.

Kotor is a historic time warp, a pedestrianised oasis whose stone streets are alive with grand palaces and mansions that speak of its once vast maritime wealth. This Montenegrin gem is also sprinkled with tempting pavement cafés and a burgeoning array of boutique shops.

Excursions include a visit to another historic gem, Budva, which comes blessed with sandy beaches too. An alternative is a deeply rewarding trip that takes in a swathe of this bijou country's highlights. This is particularly tempting as Montenegro is only now just starting to get a foothold on the tourist map of Europe.

Inspired to book your next cruise? Whether you're hoping to explore the shores of the Med or the likes of the Caribbean, don't miss our collection of Marella Cruises' deals and offers on journeys in 2022/2023. 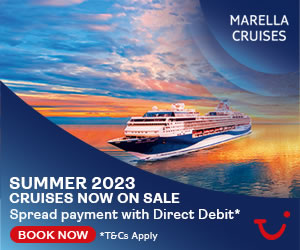 More about the Mediterranean 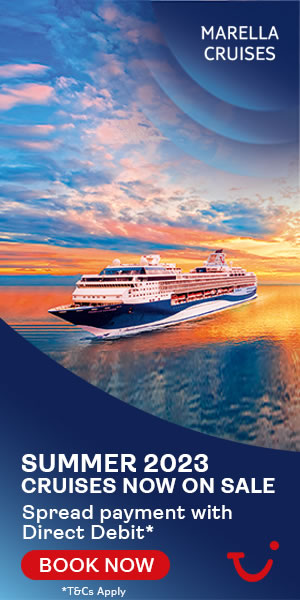