Some of Europe's most beautiful cities pepper the Baltic Sea coast, from Nordic headliners to burgeoning Baltic states.

Naturally, these intriguing port cities are major cruises destinations, and in this tried-and-tested guide to the region, we share just a few of the attractions and historical sights that make them so very popular.

Baltic & Nordic cruises: for an all inclusive, adults-only voyage around some or all of the following Baltic Sea and Nordic ports, check out the latest itineraries and deals from Marella Cruises* 2022/2023.

The Swedish capital* is not just one of the most attractive cities in the Baltics, but in all of Europe. This grand dame ripples across a sprinkling of fourteen islands and numerous green spaces, linked together by fifty bridges.

Also enthralling is the striking imprint of man in the form of art galleries, museums and palaces, including the Palace of Drottningholm. The Swedish royal family still lives here in a city renowned these days for its quality of life and cutting edge Nordic design.

Pop music fans will be delighted with the dedicated Abba Museum, while there is also a museum dedicated to those most famous of Baltic cruisers, the Vikings. You can book a hop on hop off bus tour onboard before you arrive.

Sweden's second largest city is no longer content to play second fiddle, with its lifeblood harbour and the myriad Dutch-built canals today alive with life and civic confidence.

The epic 8,000 sq metre Volvo Museum is worth visiting for alone, but it's backed up by a flurry of further museums and galleries (the Konstmuseet boasts works by Rembrandt, Rubens and Van Gogh) and Liseberg, Scandinavia's largest amusement park, an essential stop for cruising families.

Cosy couples can chill out on the long sweep of Avenyn, where a sprinkling of pavement cafes and bars tempt. Gothenburg* also boasts a swathe of green lungs while harbour cruises are there for those who just cannot get enough of being out on the water.

The Norwegian capital* enjoys a spectacular setting amidst rugged hills and sweeping fjords. If not as postcard-pretty as Stockholm, the city's cultural treasures are on a par.

Especially with the new National Museum, due to open early in 2020, with a gallery housing works by Gauguin, Picasso, Manet and Renoir, not to mention celebrated Norwegian artist Edvard Munch's infamous 'The Scream'.

The Viking Ship Museum delves into the truths behind the much romanticised Vikings - the highlights are the world's two best-preserved wooden Viking ships, which, remarkably, date back to the 9th century.

Copenhagen* is one of those cities whose icons are known around the world. Think Copenhagen and that Mermaid and the famous Tivoli Gardens immediately spring to mind, but this is also a deeply cultural oasis that is very much the artistic and creative hub of modern Denmark.

Scandinavia's largest city may be at the cutting edge of Nordic design today, but its palpable buzz is built on its rich and eclectic past. This is nowhere more apparent than in Copenhagen's grand castles and palaces like Amalienborg Palace, Christiansborg Palace and Rosenborg Castle, the latter housing the Museum of Danish Royal History.

The Danish National Gallery, meanwhile, showcases over 700 years of western art and cultural history, all under one, itself impressive, roof. Combine history, sightseeing and exercising by booking a city kayaking excursion before you cruise in.

Skagen* is tucked on Denmark's northernmost extremities, staring out towards Sweden. It is around here that the Baltic Sea and the North Sea meet so you can paddle in two famous seas.

Their meeting is dramatic as the area is famous for its clean white beaches, which have inspired poets, painters and dreamers for centuries.

Discover just how painters have captured the light and big skies at the Skagens Museum, where you can browse the art and survey the former studio of P.S. Kroyer.

Numerous excursions can be booked onboard, including a beach-themed trip that takes you to a mysterious church, whose congregation had to dig their way in through the sand for centuries. Today, only the ghostly tip of its tower peeks through the grains to tell the tale.

Often a jumping off point for excursions into Copenhagen, this busy market town in western Denmark* on the country's largest island of Zealand, has plenty to recommend it in its own right, especially for passengers who are already well acquainted with the Danish capital.

You can amble around the attractive streets - some of the oldest buildings date back over 500 years - checking out the wee shops and cafés, before hitting the local beaches.

One place you cannot miss, literally, is the Church of Our Lady, whose striking quintet of towers soar up on the skyline. Those myriad Copenhagen excursions tempt, too.

You'll be glad when you sail in that the hulking fortress here is no longer manned in anger. This deeply historic town* takes its name from Denmark's 17th-century king, Frederick III, and it enjoys a strategic locale, sitting perched on the eastern shores of the Jutland Peninsula.

The old core sits snug within sturdy old walls, but today barracks and officers' quarters have given way to wee cafés and shops that cater for calling cruise ships. Once you've dosed up on history the town's Blue Flag beaches await with less cerebral charms.

Kids will be desperate to make an excursion to Billund, where the original Legoland awaits, or Odense, where you can visit the house where fairytale writer Hans Christian Andersen grew up.

Not just a cruise port, the area around Warnemunde* is renowned throughout Germany as a holiday spot with its necklace of sandy beaches.

The adjacent town of Rostock appeals with a curl of atmospheric medieval streets to explore, St Mary's Church, with its remarkable Baroque organ, and also what is said to be the world's oldest astronomical clock. Book aboard for the narrow-gauge Molli steam train, a real trip back in time.

The most popular excursions are those to the German capital of Berlin. Berlin's attractions are manifest, from the old Berlin Wall and the grand Brandenburg Gate, through to the brilliantly reborn Reichstag, a fitting symbol for a mesmerising city that has transformed itself at the very heart of modern Europe.

The Finnish capital of Helsinki* is a grand, stately city that reclines right on the Baltic Sea surrounded by a necklace of islands. Helsinki's grand boulevards and refined architecture lend it an urbane and impressive air that is echoed in its sophisticated cafés, bars and restaurants.

Helsinki's most impressive square is Senaatintori, a lavish public oasis home to the city's starched white cathedral. The square is so grandiose that in Hollywood movies it is often used as a St Petersburg stand-in.

The Kauppatori Market, meanwhile, bursts with life and expertly crafted woodcrafts from the Finnish countryside, as well as hand-knitted woollen jumpers; while Stockmann on Aleksanterinkatu is Finland's oldest and largest department store.

Water runs through the veins of this German city as it sits inside a 17 km long fjord and by the eponymous 98 km long canal that allows ships to nip between the North Sea and the Baltic Sea without having to trawl around the northern tip of Denmark.

Further aquatic sights include the 72 m tall naval memorial (which has an observation gallery), an annual sailing festival and its stretch of waterfront promenade, which is home to boathouses, and the Aquarium GEOMAR.

There is also the U-Boat U-995, a once torpedo-wielding German submarine that now functions as a museum offering a unique window into submarine warfare. Excursions to Hamburg, one of northern Europe's great cities are also easily arranged from Kiel*.

The third largest city in Lithuania is an up and coming cruise ship destination most known for the handy access it offers to the Curonian Spit, an epic UNESCO World Heritage sand dune kissed peninsula Lithuania shares with the Russian enclave of Kaliningrad.

Klaipeda* itself boasts a flurry of historic timber houses and a sprinkling of medieval squares. Theatre Square (home to the Klaipeda Drama Theatre, where Hitler addressed the population following the German occupation) is the star, adorned with a sculpture of Annchen von Tharau from Simon Dach's poems.

Other highlights include the old red brick Post Office and the Martynas Mazvydas Sculpture Park, which sports over 100 outdoor sculptures.

You can book excursions to the Curonian Spit or for a trip that delves deep into the timewarp of traditional local village life.

This bustling, dynamic city well deserves Graham Greene eulogising it as the 'Paris of the North'. The Latvian capital* excels with an expansive old town on UNESCO's World Heritage list.

Then there's the central district, also enshrined by UNESCO, where you will find the finest German Art Nouveau or Jugendstil, left standing following WWII. Riga Cathedral, a riot of Gothic and Romanesque, is the old town's stellar attraction.

Shopaholics should make a beeline for the recently expanded Central Market, a glorious temple to retail that has anything and everything spectacularly set in old Zeppelin airship hangers. A fun excursion is a sightseeing tour that combines walking with a ride on a retro tram.

Still looking for the perfect Marella cruise destination? Don't miss our expertly-written port guides to the Caribbean and Mediterranean for added holiday inspo.

Travel pundits have hailed the Estonian capital 'The New Prague'* and it's easy to see why with its chocolate-box-pretty old town, swathes of history and a liberal sprinkling of excellent bars and restaurants.

That cobbled old quarter is awash with lofty church spires and orange tile rooftops. These days, it's alive with chic shops and hip cafés too. Half the fun is just ambling around the streets drifting back through the layers of history that emerge at every turn.

Russian orthodox churches and Dominican monasteries share the streets with old merchant houses and medieval meeting halls. Beer aficionados can book a tour of the home of the excellent local tipple Saku before they even arrive into port.

St Petersburg* soars above most other European cities with its epic cocktail of sweeping onion-domed churches, lavish Tsarist-era palaces and cultural treasures, making it the perfect port of call.

Given the breadth and scale of its impressive historic centre many people presume St Petersburg is a lot older than it is. It only dates back to 1703 when Tsar Peter the Great realised his dream of creating what Pushkin described as a 'window to Europe' - a flamboyant city that turned its back on the drab Russian plains.

The 332 bridges spanning the city's waterways magnify its fairytale charm and have earned it the moniker 'Venice of the North'. The Winter Palace, the former residence of the Russian Tsars, is spectacular.

Tempted by one or all of these ports? Don't miss the latest offers on voyages around the region with Marella Cruises. 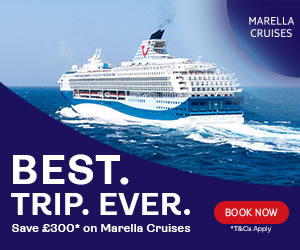 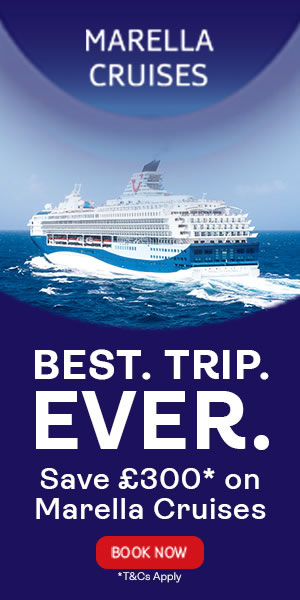