9 of the world's spookiest tours to try this Halloween

Take a deep breath and venture into the unknown, the paranormal and the otherworldly. Here are some of the spookiest tours in the world - none for the faint of heart!

Historically fascinating, visually arresting, the ancient Old Town of Edinburgh, perched on an enormous outcrop of granite, is a Scottish gem.

But it reeks with dark and unsavoury places to visit after dark. Blair Street Underground Vaults, a maze of chambers and passages underneath the South Bridge (Edinburgh's first shopping precinct), is full of unexplained sightings.

Construction had been rushed, and the surface never properly sealed, so water soon penetrated. Slum-dwellers took over this damp underworld and it became a renowned red-light district plagued by crime.

Notorious murderers Burke and Hare, who sold the bodies of their victims for medical research, hunted here. Above ground, a graveyard stroll through Greyfriars Kirkyard, one of the most haunted places in the UK, is de rigeur as is a visit to the Grassmarket, known for grisly public executions.

Interested in taking a tour to remember? Check out the latest offers on exciting guided tours in destinations around the globe with Get Your Guide.

Gun battles between the Stockton Gang and Simmons Gang, several lynchings, a fire in 1889, the Spanish Flu epidemic and killer avalanches in the mountain mining camps have all contributed to countless ghost stories.

The 19th-century Strater Hotel, built directly alongside the railroad, is famous for its hauntings. The ghostly figure of a man in a white shirt standing on the railroad tracks from the adjacent alley has been seen.

Other apparitions are of a railway engineer in period clothing, a barmaid and a young girl walking through the hotel lobby. The 75-minute Ghost Walk Durango tour begins at 6.00 pm.

Paris exudes charm with its romantic River Seine, intimate cafés and soaring monuments but its underground Catacombs tell a quite different story from that above ground.

When the 600-year-old Cemetery of the Innocents was closed due to the spread of infection, it was decided to use an underground quarry as the municipal ossuary.

The new site was consecrated on 7 April 1786 and remains deposited until 1814. Processions of surpliced priests sang the service for the dead as they followed the route taken by carts loaded with skeletons and covered by a black veil.

Particularly gruesome are the walls of bones throughout the 1.5 km-long tunnel. Now open to the public, those of a nervous disposition are not advised to visit.

The abandoned mining town of Kolmanskop is virtually frozen in time, a chilling reminder of Namibia's German colonial past.

Lying adjacent to the Sperrgebiet (forbidden area), visitors and voyeurs wander among its derelict houses and buildings. Situated near coastal Lüderitz, on the edge of the Namibian desert, it was built in the 19th century for the first diamond miners.

Kolmanskop has stately homes, a hospital, a ballroom, the first x-ray-station in the southern hemisphere, plus the first tram in Africa.

But the pressure to uncover more jewels meant townspeople, on hearing of vast discoveries further south, left homes and possessions behind. Kolmanskop was declared desolate in 1954. Tours run daily at 9.30am and 11.00am, 10.00am on Sunday.

Officially the most haunted place in the United States, the French Quarter of New Orleans has tales that hark back to colonial times when piracy, yellow fever and prostitution were rife.

Voodoo was practised, brought from West Africa, and above-ground cemeteries and mausoleums filled up with victims of disease and violence.

The Haunted French Quarter tour visits the LaLaurie Mansion on Royal Street, infamous for its torture of slaves who were murdered by their mistress, plus 1113 Rue de Chartre where the spectre of Confederate General P.G.T. Beauregard is seen searching for his boot.

The Orleans Hotel on Dauphine Street is haunted by a Confederate soldier who likely frequented May Bailey's bordello operating at this location. Tours last approximately two hours.

Deep in the Carpathian Mountains of Transylvania atop a 60-metre-high rock is the 13th-century fortress, Bran Castle.

Its (albeit mythical) former resident, the infamous Count Dracula, was made famous by the writings of Bram Stoker. Victorian readers were gripped by tales of the Count whose bite condemned victims to existence as one of the undead.

The castle's dimly lit passageways and underground compartments hold weapons and torture devices and are full of myths of nocturnal occurrences. The medieval town of Brasov with its Gothic Black Church is part of this full-day Transylvanian tour*.

The abandoned and mysterious 15th-century Tash Rabat is a stone caravanserai high in the desolate mountains of the Nyran Province of Kyrgyzstan.

Originally, it may have been a Nestorian or Buddhist monastery, which would explain the otherwise unusual domed roof room in the middle of the structure.

Caravanserais were a type of roadside inns that were strategically placed along the Silk Road, which formed part of invaluable trade routes between China and the Mediterranean that passed through the most dangerous and inhospitable regions imaginable.

These inns were important safe-havens for countless travellers and their livestock. Opt to stay and you can rent a yurt overnight and take guided tours on foot or horseback.

The horrific explosion that took place at the Chernobyl power plant on 26 April 1986 was the worst nuclear disaster in history.

Now the exclusion zone is open to visitors (minimal time is spent near the fourth reactor) and radiation exposure - equivalent to 0.001 of a hospital x-ray - is deemed safe.

Though nearby villages have been ploughed under, the city built for nuclear plant workers still stands. Pripyat was evacuated the day after the explosion and is an eerily silent ghost town.

Victims of the explosion were buried in Moscow's Mitino Cemetery in concrete coffins. Two-day tours of Chernobyl kick off from Kiev, Ukraine.

Built in 1862, it's the oldest gaol in New Zealand and was the scene of several hangings. Nowadays, unexplained footsteps, disembodied faces, doors opening and closing unaided, plus an annual visitation by a convicted murderer are some of the recorded occurrences.

The original gallows are in the courtyard and, in a nod to a non-Christian burial, a single prisoner is interred standing up.

Decommissioned in 1993, Napier Prison re-opened to tourists in 2002. Guided tours are held twice daily, while audio-tours are also available.

Looking for even more spooky stories? Browse Halloween tours the world over* with Get Your Guide. 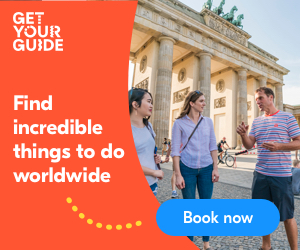 More Get Your Guide offers >>